It's day six of The Other Room's Young Artists Festival, and the pub is buzzing with our seven companies of actors, directors and writers preparing a rehearsed reading for the afternoon. They smashed three performances already, presenting seven 10-minute plays by well-known writers from across the country - tonight is their last show, and it's a sold out one!

This is what some of our young artists have to say about the festival:

"The care and support that the other room team provides to the young artists is what makes this festival stand out amongst its peers. They create a safe space in which artists can experiment, create and flourish, whilst also pushing them to achieve a high standard of work." Duncan, director of 'The play that isn't about sex'

"Albeit a small city, an artist can sometimes get lost and miss out on chances to collaborate. The Young Artists Festival offers all this, and it's been a joy to meet up and work with a whole host of young theatre practitioners, in a safe and creative environment, under the watchful eye of the Other Room Team. It has also helped me re-calibrate as a performer, and it's even opened my eyes to the possibility of branching out to other avenues within the industry. I may even apply next year for the writing or directing strand... who knows?!" Lynwen, actor in 'The play that isn't about sex'

"As someone who doesn't hail from Cardiff, and who didn't really know of The Other Room until about 2 months ago, I have been totally overwhelmed by the passion, support and self-belief that the festival participants, and The Other Room team, have brought to the table over this week. It's been nothing short of a dream to work with such energetic and wonderful people, and I can safely say it has cemeted my ambition to try and become a theatre director!" Fred, director of 'Blue Sky Thinking' 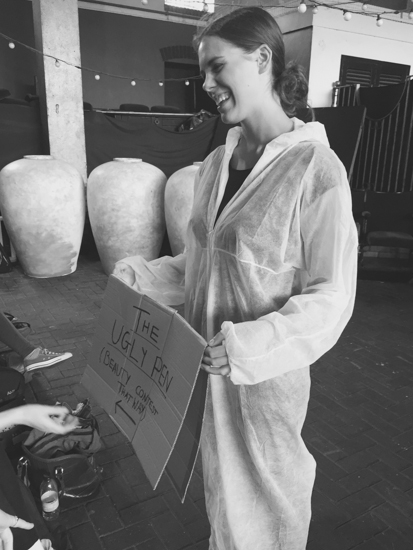 "This week has been an incredible experience. To get the chance to work with a completely new and diverse group of actors, writers, directors and stage hands is a gift. We started the week with some workshops from some industry professionals from all different aspects of the industry and gained some invaluable information and tips. On Tuesday we were sorted into our companies with a writer and director to work on some original plays written for the festival. The scripts were a gift to work with and all were completely different in subject matter and final performance. It was a challenge working on our piece 'You Make Me' by Joel Horwood, but with the directorial skills of Emily Stroud the process was a joy and we were all really pleased with the final outcome. This week has been of the best I've had so far within the industry and has helped me create so many connections and lasting friendships. It really is the best thing to do. Thank you The Other Room!" Tobias, actor in 'You Make Me' 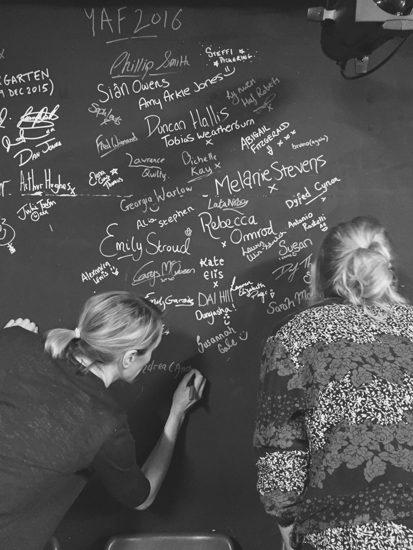 Participants signing the wall of the theatre, photographed by Scott Suter

"This week has been extremely challenging, inspiring and nervewracking, and I loved every minute!" Susan, writer

"Last year I came to YAF as a writer and I had a wonderful time so this time I returned to dabble in a bit of directing. It was a very different experience but bloody useful and an absolute ball. The rehearsal process passed in a blink of the eye so we all had to be incredibly decisive and to produce finished pieces of work. Kate and Ben were ruthlessly supportive and, though having them in the room could be a little nerve-racking, they played a huge part in pushing us to make the best shows we could. My cast and the rest of the YAF lot are nothing but wonderful and warm; it just goes to show how being in a room with people who love the same thing as you is the most inspiring thing in the world." Bruno, director of 'Frozen'

Have you got something to say about the festival? We'd love to hear from you! Get in touch!